Cruises from Copenhagen depart from late spring through early fall.

Copenhagen is the lively capital city of Denmark with storybook charm. Tourists will want to view the Little Mermaid statue, inspired by Hans Christian Andersen’s fairy tale; visit Tivoli Gardens, the world-famous amusement park; and witness the changing of the guard at 18th-century Amalienborg Palace, home of the Danish royal family. Another palace of note is the grand Christiansborg Palace, located on the island of Slotsholmen atop ruins of a castle from 1167. Now a government building, the palace hosts the Danish Parliament, the Supreme Court and the queen’s throne room. Many excursions feature these major attractions as well as the Royal Danish Opera and Kronborg Castle, the setting of Shakespeare’s “Hamlet.” Other outings explore Copenhagen’s canals and bustling harbor by boat or kayak, or head to Dragor, a charming fishing village with winding cobblestone streets and seaside restaurants. 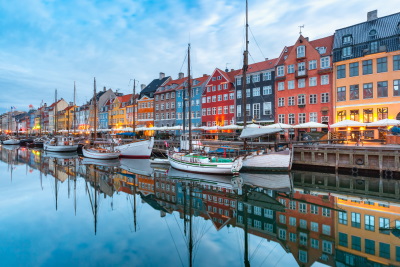 Call us at 800-338-4962 or inquire about a vacation here.
Open Mon-Fri 8am to 6pm, Sat-Sun 9am to 1pm, U.S. Central Time
Departure Ports
Copenhagen
London
Reykjavik
Southampton